The Only No. 1 Beatles Hit That Features a John Lennon Guitar Solo 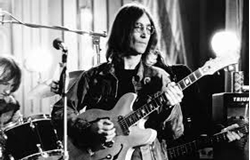 If you asked someone who played lead guitar in The Beatles, the simple answer would be George Harrison. However, that didn’t mean John Lennon (the rhythm guitarist) wouldn’t take a solo now and then. John had done so in the early days on tracks like “Long Tall Sally” and “You Can’t Do That.”

By the time the Fab Four got to the White Album sessions (1968), the every-man-for-himself situation meant more solos for John. On that double album, you’ll find him taking the lead on “Yer Blues,” “Happiness Is a Warm Gun,” and even Paul McCartney’s “Honey Pie.”

Over the years, only a handful of tracks with guitar solos by John went out on Beatles singles, and they were usually B sides. That happened in the White Album era as well, when Paul’s “Hey Jude” had the heavy version of “Revolution” (with a solo by John) on the B side.