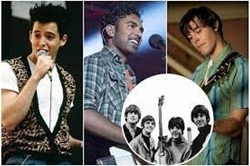 ”The Royal Tenenbaums,“ ”The Social Network“ and ”Withnail & I“ have all made use of classics by the Fab FourThe Fab Four have provided the soundtrack to some great movie moments over the years -- and we're not even counting movies that exclusively use Beatles songs like "Across the Universe," "I Am Sam" and The Beatles' own movies "A Hard Day's Night," "Help!" and "Yellow Submarine."In this wistful moment in Sergio Leone's sprawling epic "Once Upon a Time in America," Robert De Niro plays a gangster leaving New York to the sound of an old fashioned, Ennio Morricone score, only to return years later as a now worn old man. As he steps back into 1960s New York to look back on the memories of his former life, Morricone's score blends into a rendition of "Yesterday" that is as forlorn as the movie itself.