Listen to ‘Isolation’, the sparse fifth track on ‘Plastic Ono Band’ (John Lennon’s first post-Beatles record), a meditative piano ballad on which he laments the fact that “the world may not have many years”, and you may find it difficult to believe that the album turns 50 this year. Featuring both the brittle, paranoid ‘Working Class Hero’ and the unabashedly romantic ‘Love’, it’s a timeless collection that truly encompasses the complex singer-songwriter’s duality.

It would have been John Lennon’s 80th birthday earlier this month. To celebrate both this and the album’s anniversary, publisher Thames & Hudson has released John & Yoko / Plastic Ono Band, a lush coffee table book that gathers together interviews new and old, hand-written song lyrics and previously unseen photos – from Lennon’s childhood snaps to candid studio pics – that tell the story of this singular musician and magnificent record.

details
John Lennon and Paul McCartney Both Took Stabs at Reggae in the '70s - Friday, October 30, 2020

If you were a fan of Jamaican giants Toots Hibbert and Bob Marley, the idea of British pop stars recording reggae songs might have terrified you. Did the world need that ’74 Eric Clapton cover of “I Shot the Sheriff”? Clapton thought so. The former members of The Beatles also went there in the ’70s.

That wouldn’t have come as a complete surprise to fans of the Fab Four. After all, The Beatles took their first stab at Jamaican music way back on 1964’s “I Call Your Name.” On that track, you hear the band shift into a ska beat in the middle eight bars.

Island sounds crept into the band’s music again on The White Album (1968). On that record, McCartney developed “Ob-La-Di, Ob-La-Da” with a rocksteady beat. (While the recording reportedly bugged Lennon to no end, it wasn’t the groove that annoyed him.)

After the Beatles’ breakup, Toots & The Maytals and Marley & The Wailers broke internationally with their reggae sounds. And Lennon and McCartney took a stab at the music in their ’70s solo work. In both Lennon’s and McCartney’s cases, these dives into reggae predated that of Clapton.

details
John Lennon wife: What happened to Cynthia Lennon after her divorce from The Beatles star? - Thursday, October 29, 2020

John Lennon was married twice at different times of his life, though his marriage to Yoko Ono was best known. Before this, however, he was married to Cynthia Lennon, whom he met before he was famous. But what happened to Cynthia, after she and John broke up?

Cynthia Lennon first met John in 1957, when they were both attending Liverpool College of Art.

They began dating and in 1962 she became pregnant with Julian, who was subsequently born on April 8, 1963.

At this time, the band was only just making it big in the music business, but in the years which followed, The Beatles’ fame morphed into Beatlemania

Their relationship began to break down until John met avant-garde artist Yoko Ono and they began corresponding in 1966.

From classic American rockers to British artists to the estates of late legends, here's a look at some of the musicians who have objected to Donald Trump using their songs at campaign events.

Some classic rockers say not only do they oppose Trump using their music, the choice of songs is ironic or downright wrong. John Fogerty, who last week sent the campaign a cease-and-desist letter over the use of “Fortunate Son” by his band Creedence Clearwater Revival, said he was baffled by the use of a song that could have been written to slam Trump. Phil Collins sent the campaign a demand to stop using “In the Air Tonight" after it was played at an Iowa rally this month. Many observers say it was an odd song to choose given that the air among the mostly mask-less people at the rally could have been spreading the coronavirus. And just as he had with Ronald Reagan in 1984, Bruce Springsteen objected in 2016 to Trump blasting “Born in the U.S.A." as a patriotic anthem, when it's actually a scathing indictment of the treatment of Vietnam vets.

Guitarist Steve Lukather on surprising Paul McCartney and why "it all begins with the Beatles" - Thursday, October 29, 2020

Grammy-Award winner Steve Lukather, best known as the lead guitarist for Toto, recently joined host Kenneth Womack to talk about the Beatles on "Everything Fab Four," a new podcast co-produced by me and Womack, a music scholar who also writes about pop music for Salon, and distributed by Salon.

Lukather, who has played on over 2,000 rock and pop tracks, talks about how he went from being "shitty at sports" and "bullied as a kid" to finding his soul in music when the Beatles hit "The Ed Sullivan Show" in 1964.

"Life went from black-and-white to color," says Lukather. "I was like, I gotta learn how to do that. I [joined] a band when I was nine. I mean, what are the odds of a little kid from West Hollywood seeing the Beatles on 'Ed Sullivan,' then playing on the 50th anniversary of that show?"

Nowadays, having been a member of Ringo Starr's All-Starr Band for years, he counts Ringo as one of his closest friends. "I cherish that relationship probably more than anything at this point," Lukather says. "Ringo's the coolest guy I've ever been friends with — and I have a lot of cool friends."

During an appearance on BBC 6 Music, The Beatles legend Paul McCartney talked about the ongoing pandemic, his upcoming new album "McCartney III," and more.

"McCartney III" is due this December, you can check it out here via Amazon.

When the interviewer said, "This is 'McCartney III,' so let's do a bit of context - if this is maybe the third part of the trilogy. 'McCartney I' in 1970 - that was kind of the start of the lo-fi-DIY-play-and-produce-everything-yourself. Have you always had a soft spot for that record?

"Oh, yeah. It happened just because I was spending a bit of time at home because, suddenly, I wasn't in The Beatles anymore.

"So you're a bit of a loose end, to say the least. But I had all my stuff - I had a drum kit, I had my bass, I had my guitar, had an amp, I got hold of a four-track recorder from EMI, which is the same machine that we'd used with The Beatles.

"So I just went real-lo-fi, just plugged the microphone straight into the back - didn't have a mixing desk - and made some music. That was it!"

Kittens Lennon and Ringo get by with a little help from their friends - Tuesday, October 27, 2020 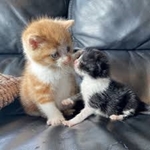 A kitten named after John Lennon when he was found on what would have been The Beatles star's 80th birthday has adopted the role of big brother to a smaller cat called Ringo.

Ginger tabby Lennon was named by RSPCA inspector and Beatles fan Anthony Joynes after he was discovered by students on John Lennon Drive in Liverpool earlier this month.

The frightened cat was taken to the RSPCA Wirral and Chester branch to be cared for, and has since become inseparable from a tiny black and white kitten.

The purring pair became so close staff decided to name the smaller cat after Beatles bandmate and drummer Ringo Starr.

Ringo has been hand-reared by staff since he was rejected by his mother at birth but has found a big brother figure in Lennon.

The debate between the Beatles and the Rolling Stones has been going on ever since they first crossed paths on the charts 55 years ago. The argument at the time, and one that still persists, was that the Beatles were a pop group and the Stones were a rock band: the boys next door vs. the bad boys of rock. So who’s better? Tribute bands Abbey Road and Satisfaction engage in an on-stage musical showdown at 8 p.m. Saturday, November 14 at the Greenville Municipal Auditorium (GMA).

Full COVID protocols and socially distanced seating are in place.

Taking the side of the Fab Four is Abbey Road, one of the county’s top Beatles tribute bands. With brilliant musicianship and authentic costumes and gear, Abbey Road plays beloved songs spanning the Beatles’ career. They face off against renowned Stones tribute band Satisfaction - The International Rolling Stones Show, who offer a faithful rendition of the music and style of Mick Jagger, Keith Richards and the bad boys of the British Invasion.

“Music fans never had a chance to see the Beatles and the Rolling Stones perform on the same marquee,” said Chris Legrand, who plays “Mick Jagger” in the show.

The Beatles enjoyed lucrative fame and fortune over the course of their tenure. The band achieved 16 number one singles over their ten years in the charts, kickstarting the legacy of each of their members for decades to come. Perhaps one of the most popular of the Fab Four was John Lennon. Lennon was tragically murdered on December 8, 1980 by Mark David Chapman.

Since then, his life has been celebrated in various forms, including film.

One of the films telling the story of his early life was 2009's Nowhere Boy.

The film saw a young Lennon picking up a guitar for the first time, assembling a team of young musicians, and creating the most legendary band of all time.