John Lennon Started Writing The Beatles' 'Come Together' for This Celebrity - Friday, March 26, 2021

The Beatles weren’t an especially political band, however, John Lennon revealed one of their most famous No. 1 hits, “Come Together,” was originally supposed to be a campaign song for a famous 1960s politician. In addition, John said the original version of the song sounded like another famous British band — The Kinks.In Jann S. Wenner’s book Lennon Remembers, John discussed his attitude toward The Beatles’ classic album Abbey Road. He liked the A-side but wasn’t a huge fan of the B-side. He ultimately deemed Abbey Road “competent” but lifeless. When discussing Abbey Road, he couldn’t even remember most of the songs on the album. However, he said one of the most famous songs on the album, “Come Together,” was “alright.”

In addition, John revealed he wrote “Come Together” for “the Learys.” He was talking about noted psychedelic drug advocate Timothy Leary and Rosemary Leary, his fourth wife. “See the Learys wanted me to write… them a campaign song. And their slogan was ‘Come together.’ I wrote it, I’ve still got it, it’s actually very like The Kinks – (sings) ‘Dra-a- details

GEORGE HARRISON was a huge part of The Beatles' first film, A Hard Day's Night, and the movie's director Richard Lester revealed the "quiet Beatle" was the best actor in the band. Lester also said he didn't give any of the band members scenes which they couldn't handle, even though he axed Paul McCartney's solo shots.

A Hard Day’s Night was released in 1964 to critical acclaim. The two-time Academy Award-nominated film showcased a fictionalised version of The Beatles dealing with their fame. On top of working with the press, fighting back their fans and working up to a prestigious TV performance, they were given scenes which showed their humour and personalities. The BAFTA-nominated director explained years later how he found working with each of the band members and touched upon the quality of their acting.

George Harrison, in particular, was the “best” actor out of the band, Lester said.

While talking at the BFI in 2014 the director revealed: “George, I think, was the most effective actor all the way through. 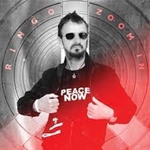 The former Beatle released his latest album on Friday, a five-song package he appropriately named Zoom In after the videoconferencing service.

Mr. Starr made the record last year from his home studio in Beverly Hills, California, under conditions that US virus czar Anthony Fauci might have approved. Musicians who joined him were tested for the coronavirus, and no more than two at a time took part. They wore masks when they came and stayed six feet apart.

“It’s a weird way of making a record,” Mr. Starr said in an online press conference Thursday. “But if it’s the only way, you get on with it.”

The artist, who turned 80 last year, had no problem attracting big names to participate, including Dave Grohl, Ben Harper, Jenny Lewis, Sheryl Crow, and Toto’s Steve Lukather. Former Doors guitarist Robby Krieger recorded his contribution from home. The pandemic, which has shuttered the concert business for the past year, gave a lot of musicians free time.

“I think everyone was looking for something to do,” Mr. Starr said.

Why Paul McCartney And The Beatles Changed 'While My Guitar Gently Weeps' - Wednesday, March 24, 2021

"While My Guitar Gently Weeps" Was George's Song... And He Wasn't Happy At First.

For a band that is so beloved and so obsessed over, there really are a ton of things that are still unknown about The Beatles. At the very least, there are many little-known facts about the Fab Four as well as what they did after the band broke up. This includes which Beatle claims he spoke to aliens and which ate a celery stick in the background of another famous band's song. There's even a lot to be discovered (or re-discovered, if you're one of The Beatles biggest fans) about their most famous songs.

Without a doubt, "While My Guitar Gently Weeps" is one of The Beatles' most famous songs off of their most famous album, "The White Album"... But did you know that it was almost a VERY different song?

GEORGE HARRISON divorced his first wife Pattie Boyd in 1977. Just two years later she married guitarist Eric Clapton, one of Harrison's best friends. According to Clapton's biography, the star used voodoo to steal Boyd away from The Beatles singer. Meanwhile, Harrison worked hard on putting the sadness from his divorce into a heartbreaking song on his fifth solo album.

By 1974 George Harrison and his wife Boyd had unofficially separated. Their official divorce came two years later in 1976. The couple first met in 1964 on the set of The Beatles’ first film, A Hard Day’s Night. A prominent photographer at the time, Boyd became famous in her own right as a well-regarded model, who epitomised the fashion industry throughout the 1960s, and into the 1970s. But after years of infidelity on Harrison’s part, Boyd said she couldn’t take any more and left the singer.

The pair’s divorce wasn’t finalised until 1977, long after she had already started a relationship with singer-songwriter Clapton.

Beatles beginnings: How did The Beatles members meet? - Tuesday, March 23, 2021

Before John, Paul, George and Ringo became the Beatles, they were simply four teenagers from Liverpool. Never could John Lennon, Paul McCartney, George Harrison and Ringo Starr have imagined they would go on to form one of the most successful groups in modern history, influencing the popular culture in not only music, but also fashion, film and global representation.

In the late 1950s and early 1960s, it was difficult to imagine a band hailing from the relatively poor northwest port city of Liverpool, England, could get a gig in the thriving London music scene of the south, let alone export their eventual homegrown success to a world eagerly opening up to the counter-culture movement of the '60s and the burgeoning phenomenon that was called rock 'n' roll.
A fateful meeting between two music-loving teenagers in 1957 is where it all began. Sixteen-year-old rhythm-guitarist Lennon, the son of a merchant seaman, was performing with the Quarrymen, a skiffle (folk music blended with jazz or blues) band booked to perform at events at a church fete in Woolton, Liverpool. While setting up their instruments for the evening performance, the band’s bass player introduced Lennon to a classmate, 15-year-old McCartney, who details

The Beatles’ albums are widely considered classics, however, John Lennon wasn’t fond of all of them. In fact, he found some of them downright embarrassing. He said one album marked the point where “something just happened” and The Beatles’ music became a lot different.In 1968, Jonathan Cott of Rolling Stone interviewed John. During the interview, Cott asked John what he felt about The Beatles’ first few albums. “Depends what track it is,” John said. “I was listening to the very first albums a few weeks back, and it’s embarrassing. It was embarrassing then because we wanted to be like this. We knew what we wanted to be, but we didn’t know how to do it, in the studio. We didn’t have the knowledge or experience. But still some of the album is sweet, it’s all right.”

details
How 'Can't Buy Me Love' Changed Everything for Paul McCartney - Sunday, March 21, 2021 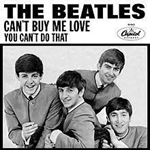 The Beatles took Paris by storm as they played 18 days of concerts in January 1964 at the Olympia Theater.

They stayed at the iconic George V hotel, now a Four Seasons property and the gold standard of luxury in the city since its construction in 1928. The accommodating staff granted a request for a piano in the Beatles' suite, where Paul McCartney began to experiment with some blues phrasing. The result was the first draft of a future hit called "Can't Buy Me Love."

They were on a roll. The Beatles landed their first chart-topping song in America at the end of December 1963 and were on their third in the U.K. with "I Wanna Hold Your Hand." Now, demand for the latest material from McCartney's hit songwriting partnership with John Lennon was at a fever pitch.

At the same time, EMI was determined to make the Beatles happen in as many territories as possible. That's how the Fab Four found themselves in the EMI Pathe Marconi Studios in Paris to record German-language versions of "She Loves You" and "I Want to Hold Your Hand."

When the session wrapped up early, they decided to record the song McCartney had been working on in the hotel, the first version of "Can't Buy Me Love." This marked the first ti details

Elvis Presley and The Beatles are two of the most famous classic rock acts of all time. However, that doesn’t mean Elvis liked all of The Beatles’ songs. Here’s a look at which Beatles songs the King of Rock ‘n’ Roll liked, which ones he didn’t like, and which ones he performed.

Joe Esposito was Elvis’ friend and road manager. According to Elvis Australia, he opened up about the singer’s feelings on the Fab Four.

“Well, Elvis loved the Beatles’ music,” he said.” I mean, let’s face it, he recorded three of their songs. He just did — ‘Yellow Submarine’ that period of time. He didn’t care for those songs.”

Esposito added “Elvis… believed in songs with a lot of good words and meaning with something behind them like ‘Michelle’ and ‘Yesterday’ and ‘Hey Jude’ and those songs. He didn’t care for that period of time. That was a drug time which was ironic. So, those songs he didn’t care about. But he didn’t say anything bad about the Beatles. I mean, there’s always stories about him putting the Bea details

The torrid courtship of John Lennon and Yoko Ono was – and still is – one of the most frequently discussed and publicly visible relationships in the history of popular music. 52 years ago today in March 1969, the two were married in characteristically bold and vocal fashion.

The immeasurably famous member of The Beatles and the avant-garde artist and activist began their relationship while Lennon was still married to his now-ex-wife, Cynthia Lennon. After meeting and maintaining correspondence from afar, Lennon invited Ono to come and visit while Cynthia was away in Greece in May 1968. During that visit, the pair spent the night recording what would become their Two Virgins album and, according to the LP’s liner notes, “made love at dawn” to cap the intense all-night session.

John Lennon was thoroughly smitten with Ono after the evening. As Cynthia explained in her 1980 memoir, A Twist of Lennon, when she returned home from her trip, she found Yoko and John in bathrobes drinking tea. Lennon, relaxed, simply said, “Oh, hi.” He had already made the decision to take his life down a new road.