45 Years Ago: How the Beatles Informed America's 'Sister Golden Hair 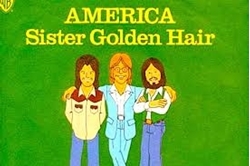 "I very openly tip my hat there to 'My Sweet Lord,'" composer Gerry Beckley told Songfacts in 2016. "I was such a fan of all the Beatles, but we knew George [Harrison] quite well and I just thought that was such a wonderful intro."

Martin brought a suitably deft production style to "Sister Golden Hair," which was released to radio on March 19, 1975. Elsewhere, a number of his artful touches bolster Hearts, the second in a run of albums with America that expanded their elemental style. Martin also brought engineer Geoff Emerick, a key figure in the Beatles' late-period studio renaissance.