Ailing and wheelchair-bound Yoko Ono is 'slowing down,' insiders say 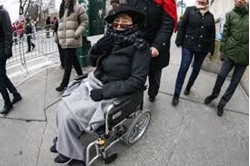 Three years ago, when the National Music Publishers’ Association presented Yoko Ono with their Centennial Song Award, Sean Lennon pushed his mother onto the stage at Cipriani 42nd Street in a wheelchair — shocking some who didn’t realize the formidable avant-garde artist was incapacitated.

But in her signature shades, black leather jacket and white Panama hat, the widow of John Lennon didn’t seem to miss a beat when she began a short acceptance speech by ­addressing the elephant in the room.

“Thank you, thank you, thank you,” she said, clutching the award in one hand and a microphone in the other as Sean whispered to her about what was going on. “I’ve learned so much from having this illness. I’m thankful I went through that.”

While it’s not clear what “illness” she was referring to, Ono, now 87, is still ailing, requires round-the-clock care and rarely leaves her sprawling apartment in The Dakota, a source close to her staff told The Post. In photos taken at rare public appearances — including a women’s march in Columbus Circle last year and at a commemoration of John in Liverpool in May 2018 — Ono is confined to a wheelchair, or walks with great difficulty using a cane, often leaning on a caregiver or Sean for support.