'And in the End: Last Days of the Beatles' Book Due 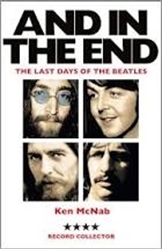 An in-depth look at The Beatles’ final year is the subject of a new book from author Ken McNab, a lifelong fan of the band. And In The End: The Last Days of The Beatles, according to an announcement from its publisher, Thomas Dunne Books, is “a detailed account of the breakup featuring the perspectives of all four band members.” The book arrives Aug. 18.

“In a month-by-month chronology,” the announcement continues, McNab “reconstructs the events of 1969 when The Beatles reached new highs of creativity and new lows of their internal strife. In the midst of this rancor, however, emerged the glorious disharmony of Let It Be and the ragged genius of Abbey Road.”

[2020 was expected to be host to another round of 50th anniversary Beatles celebrations. The pandemic, however, has altered many of those plans. Peter Jackson’s documentary, The Beatles: Get Back, compiled from 55 hours of unseen footage and 140 hours of mostly unheard audio recordings taken during the original Let It Be film and album sessions, has been moved to Aug. 27, 2021. It was originally scheduled for Sept. 4 of this year.]