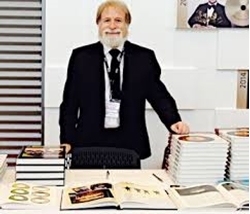 Respected Beatles historian and author, Bruce Spizer, recently announced the imminent release of his 11th book on The Beatles, The Beatles Get Back to Abbey Road, a 50th Anniversary celebration of the landmark album. Through essays by Beatles scholars such as Al Sussman, Jude Southerland Kessler, Frank Daniels, and Piers Hemmingsen, as well as a wealth of information from the author himself, Spizer supplies the complete history of the Abbey Road LP, brought to life via color and original black-and-white images. Once again, as with Spizer's Sgt. Pepper and White Album books, he includes a delightful section of both celebrity and fan memories and photos.

On Friday, September 20, Spizer will be honored with a Book Release Party during Beatles at the Ridge in Walnut Ridge, AR, where he is a Featured Speaker for the 2019 BATR Authors and Artists Symposium. Spizer will address symposium attendees, joining a panel of noted Beatles scholars such as Featured Author Jim Berkenstadt and Featured Artist Ken Orth, as well as Lanea Stagg, Sara Schmidt, Patti Gallo-Stenman, Terry Crain, James Ryan, Susan Ryan, Jude Southerland Kessler, Terri Whitney, and artist Rande Kessler.