Behind The Song: The Beatles, “A Day In The Life” 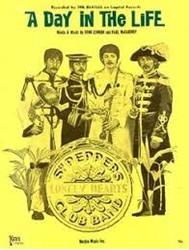 By the time The Beatles settled in to write the songs that would make up their legendary 1967 album Sgt. Pepper’s Lonely Hearts Club Band, John Lennon and Paul McCartney’s songwriting partnership had drastically transformed from the early days when they would write songs face-to-face, trading lines. It was now far more common for one of them to write a song on his own and then bring it in so the other could edit, criticize, and maybe embellish upon the raw material provided.

In the case of Pepper’s monumental closing track “A Day In The Life,” the collaboration came from the melding of seemingly disparate parts of songs that the two had written separately. As Lennon told Playboy shortly before his death in 1980, “I was reading the paper one day and noticed two stories. One was about the Guinness heir who killed himself in a car. That was the main headline story. He died in London in a car crash. On the next page was a story about four thousand potholes in the streets of Blackburn, Lancashire, that needed to be filled.”