Billie Eilish on Paul McCartney: "The Beatles were what raised me" 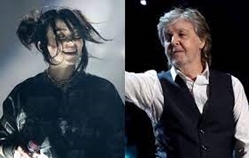 Billie Eilish has expressed shock and excitement over her headlining spot at this year’s Glastonbury festival – particularly over the fact that she was billed alongside Sir Paul McCartney and Kendrick Lamar.

Eilish closed out the Pyramid Stage on the first night of the festival yesterday (June 24), performing 21 songs in a set that NME’s Thomas Smith said “felt like proof that the future is here”. Before the performance, she spoke to NME for this week’s Big Read cover story (which is also being printed in a special edition run of 1,000 copies), declaring that she feels “so honoured to be a part of” the festival.