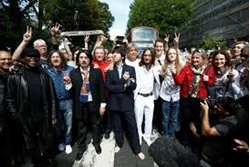 Fifty years on from that moment on August 8, 1969, it is estimated the suburban crossing in London, England, is photographed at least six times every hour, as thousands of fans seek to imitate what became one of the most enduring images in pop culture.

That count surged yesterday as fans gathered, some travelling from across the globe, to celebrate the milestone anniversary.