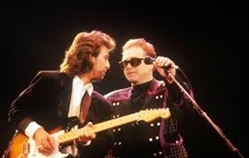 Elton John has opened up about how former Beatles guitarist George Harrison helped him during his long battle with drug addiction.

Speaking to Chris Evans on his Virgin Radio Breakfast show, the 72-year-old recalled how Harrison helped him when he was at the peak of his addiction. something he discussed in his recent memoir ‘Me’. The book sees Elton recalling the time he hijacked a Rolling Stones show while high on cocaine, as well as the moment when he mistook Bob Dylan for his gardener while high – describing him as “scruffy”.

Evans asked Elton what the “best piece of advice” was that Harrison gave him. “Stop putting that marching powder up your nose,” John laughed, before celebrating his 29 year sobriety with Evans. “Twenty-nine-years it’s been. The nose is still here!”

Elton also went on to give some advice to young musicians starting out now on the show. “You’ve got to play live…If you want to have a career, record sales will go up and down and people are so fickle,” Elton advised. He continued: “Now, when you’re young, they’ll drop you like a five-pound note on the floor and you’ve got to be able to play live and believe in yourself, but play live.”