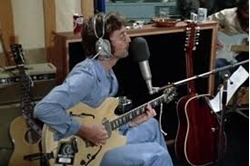 The past few months have seen several artists covering John Lennon from home in quarantine, most recently with Bille Joe Armstrong’s Generation X–inspired rendition of “Gimme Some Truth.” Johnny Depp and Jeff Beck covered “Isolation,” while the Dirty Projectors offered their own take on the song. Gal Gadot also led a group of celebrities through “Imagine,” which, really, no one needed.

Yet no major artist has covered “How Do You Sleep?” — the late Beatle’s bitter Imagine track aimed at Paul McCartney. Things had grown tense between Lennon and his former bandmate before and after the Beatles’ messy breakup in 1970, and McCartney’s “Too Many People,” from his underrated 1971 album Ram, hadn’t helped. “He’d been doing a lot of preaching, and it got up my nose a little bit,” McCartney said in 1984. “In one song, I wrote, ‘Too many people preaching practices,’ I think is the line. I mean, that was a little dig at John and Yoko. There wasn’t anything else on it that was about them. Oh, there was ‘You took your lucky break and broke it in two.'”