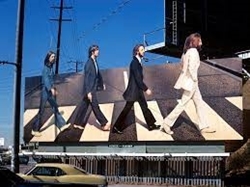 It was 53 years ago today (September 26th, 1969) that the Beatles' final album, Abbey Road, was released. Although the Let It Be album was released the next year featuring earlier unreleased tracks, Abbey Road was the last album the group recorded together. The album's working title had been Everest — after a brand of cigarettes their engineer Geoff Emerick smoked — before the group simply chose the name of the street where their recording studio was located.

Abbey Road spent 11 weeks at Number One and featured the double A-sided single “Come Together” and “Something,” the highest-charting Beatles song written by George Harrison. Paul McCartney commented on the song in The Beatles Anthology saying, “'Something' was out of left field. . . It appealed to me because it has a very beautiful melody. I thought it was George's greatest track.”