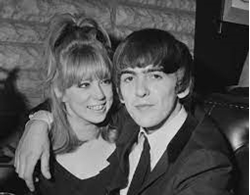 When George Harrison and Pattie Boyd were married, they decided to switch to a vegetarian diet together. Boyd threw herself into finding new recipes for them and found joy in cooking. After their divorce, though, she began reincorporating meat into her diet. Harrison remained a vegetarian for the rest of his life. When he surprised her on Christmas and saw her eating meat, he scolded her.

When Boyd and Harrison began their relationship, she took a great deal of enjoyment in cooking for them.

“When George and I first got together I wasn’t a good cook but quite enthusiastic — I knew there was something better than school food and even Lilie’s fare,” she wrote in the book Wonderful Tonight. “I tried to make the sorts of things I imagined boys from the north would like — shepherd’s pie, roast beef, and Yorkshire pudding — and then George and I became vegetarian, which gave me a whole new interest.”