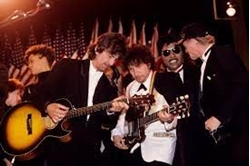 George Harrison and Bob Dylan were life-long friends who admired each others’ work. However, their relationship went deeper than that. George was often amazed by everything that Dylan did in his career and inspired him to follow his own direction and be the person he wanted to be. When they came together, they made unbelievably good music.

So, George didn’t like the Dylan fans who weren’t as open to everything Dylan decided to do. George and Dylan first admired each other as they treaded down their paths in the music industry.