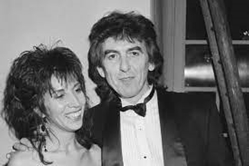 George Harrison and his wife Olivia were married for over two decades. They shared a son and weathered both celebrity and tragedy together. The couple remained together until Harrison’s death in 2001, and Olivia looks back fondly on their time together. As with any couple, though, they had some ups and downs. According to Bob Dylan’s former tour manager, Olivia became very upset with the former Beatle at Dylan’s 30th anniversary concert.When Harrison met Olivia, she was working at A&M Records, which distributed Dark Horse Records, Harrison’s label. They began dating and learned that their upbringing and values were similar. Olivia was outside of the world of fame that Harrison had been in since he was a teenager.