George Harrison Talks About His First Beatles A-Side 'Something' 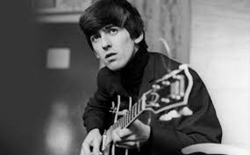 ‘Something’ was the one and only time The Beatles ever allocated George an A-Side. When I spoke to George in 1994 he told me that as a songwriter it frustrated him that be was given a lower priority than Paul and George. “It wasn’t so much the “A” side of a single but it was frustrating at times when we had to wade through millions of “Maxwell’s Silver Hammer’s” before we could get to one of mine. You know because I think now that when you look retrospectively that there were a couple of my tunes that were good enough, or better, than one’s that Paul or John had written occasionally. But you know, that’s just how it was. It doesn’t bother me really. I was just on hold for a while”.

George also confirmed that ‘Something’ was not written about his then wife Patti. He was thinking of Ray Charles when he wrote it. “I just wrote it and then somebody put together a video and what they did, was they went out and got some footage of me and Patti, Paul and Linda, Ringo and Maureen, it was at that time, and John and Yoko and they just made up a little video to go with it, so then everybody presumed I wrote it about Patti, but actually when I wrote it I was thinking of Ray Charles,” he said.