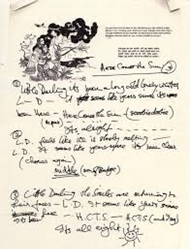 ‘Here Comes the Sun’, the iconic song most synonymous with guitarist George Harrison, featured on The Beatles 1969 album Abbey Road and is remembered as one of the band’s biggest hits.

Harrison, who wrote the song in early 1969 while staying at the country house of his friend Eric Clapton, was enduring a difficult period of his life when he created the track having recently quit The Beatles and had been arrested for marijuana possession.

“‘Here Comes the Sun’ was written at the time when Apple was getting like school, where we had to go and be businessmen: ‘Sign this’ and ‘sign that’,” Harrison later wrote in his autobiography. “Anyway, it seems as if winter in England goes on forever, by the time spring comes you really deserve it. So one day I decided I was going to sag off Apple and I went over to Eric Clapton’s house.”