George Harrison's Wife Says He Wasn't a 'Great Womanizer,' They Never Had an Open Marriage 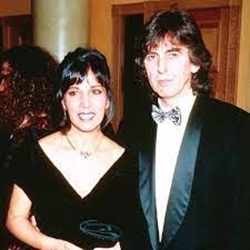 George Harrison‘s wife, Olivia, had one of the hardest jobs in the world. Being Mrs. Harrison wasn’t always a walk in Friar Park. While she supported George at every turn, he was sometimes a lot to handle. There were hiccups in their marriage. However, they got over them.

When George met Olivia in 1974, he said he had “no voice and almost no body at times.” In Martin Scorsese’s documentary, George Harrison: Living in the Material World, Olivia said, “When I first met him, he said, ‘I don’t want you to think you’ve discovered something about me I don’t know. I’m not claiming to be this or that or anything. People think they found you out, when I’m not hiding anything.’

“I thought he was really somebody who was saying something that I connected with. He was really a very captivating person… I liked the music, I liked what he was doing. We just seemed like partners from the very beginning.”