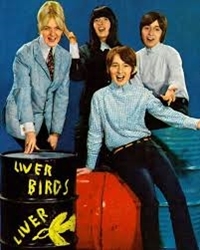 Mary, Sylvia, Val and Pam performed at the same venues as the Rolling Stones and The Kinks and had equal billing with Chuck Berry in Hamburg, where they were known as “the female Beatles”. Which must have really annoyed John Lennon. When he met them backstage at the Cavern, he told them: “Girls don’t play guitars.” They turned down the Fab Four’s manager Brian Epstein, hung out with Jimi Hendrix and The Four Tops, helped The Kinks record their first No1 and guitarist Pam had a fling with Mick Jagger. But Mary McGlory, Sylvia Saunders, Valerie Gell and Pamela Birch never became household names like their male contemporaries.

Now, more than 50 years on, the ­incredible story of the four teenagers and their part in the Merseybeat revolution is finally being told in a new musical, Girls Don’t Play Guitars, a whirlwind tour through the band’s five years together, created with the help of its two surviving members, drummer Sylvia, 72, and bassist Mary, 73, pictured right.