How many times did The Beatles sing the 'Na na na' chorus in Hey Jude? This pie chart explains 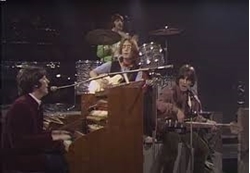 How many times did The Beatles sing the ‘Na na na’ chorus in Hey Jude? This pie chart explains

To call The Beatles the greatest band of all time would not be an exaggeration. That is just a fact. ‘We’re talking about a revolution’ when it comes to their unique sounds and creativity. If the music industry is currently using any technology or sound, chances are The Beatles invented it. From blues, metal, psychedelic, love ballads, and pop, they wrote something in every genre. And they did it so well that it is impossible to talk about music and not talk about The Beatles.

Their songs are so iconic that even after half a century, they remain some of the most recognisable ones in the world. It’s hard to believe that they only played together for a span of 8 years. And even after all this time, The Beatles mania is very much alive. With Sir Paul McCartney and Ringo Starr still dominating the stage, nobody is going to forget about them anytime soon.