How Ringo and John Lennon Moved On From The Beatles Together 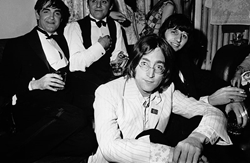 If you read about the breakup of The Beatles, it’s impossible to ignore the various hostilities among the band members. The feud between John Lennon and Paul McCartney always attracted the most interest, but there were others.

In the Let It Be documentary, you see a particularly testy exchange between Paul and George Harrison in early ’69. George also had problems with John, who wasn’t giving George’s songs the respect they warranted. All this ended up with George quitting the band, and it took some doing to bring him back.

However, you never see anyone warring with Ringo Starr. Though Ringo left the group for a spell during the White Album sessions, he didn’t seem to have personal beefs with other band members. In fact, while trying to get George back into the group, Ringo’s house was the site for negotiations.