Imagine all the aliens! John Lennon's never-seen-before sketch of a UFO - drawn after he thought ... 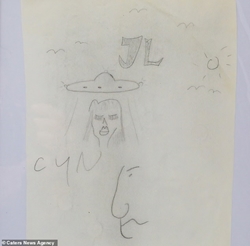 A sketch of a UFO by John Lennon is up for auction, along with his sci-fi magazines and a lock of his hair.

The Beatles singer-songwriter was reportedly fascinated by alien life, even writing about them, and was believed to have had 'UFO experiences'.

He drew the rarely seen sketch of a flying saucer in the 1950s or 1960s, then years later saw a UFO outside his apartment window traveling over New York's East River on August 23, 1974.

According to his lover May Pang, who was Yoko Ono's secretary, the star spotted a flying saucer - screaming at the window 'wait, take me with you' to what he believed was a UFO.