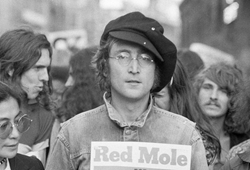 Patti Smith, Jackson Browne, Natalie Merchant, Rosanne Cash, Taj Mahal and many more artists will be featured in the 40th annual John Lennon Tribute Charity concert presented by Theatre Within, the non-profit organization that has presented the concert since 1981. The concert will be streamed for free at LennonTribute.org and will premiere on what would have been John Lennon’s 80th birthday, Oct. 9 at 7 p.m. and thru Oct. 12 at midnight.The program will feature unreleased performances from past tributes and new performances of John Lennon and Beatles classics by the above artists as well as Jorma Kaukonen, Martin Sexton, Joan Osborne, Bettye LaVette, Shelby Lynne, Marc Cohn, Willie Nile, Nicki Richards, The Kennedys, Ron Pope, and Music Director Rich Pagano.