John Lennon Explained the Setting of The Beatles' 'Penny Lane' 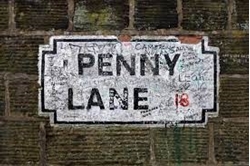 John Lennon said The Beatles’ “Penny Lane” was one of his more personal songs. He explained the setting of “Penny Lane” and his connection to it. He was more connected to the actual Penny Lane than the other Beatles.

John Lennon said The Beatles’ “Penny Lane” reflected his life. In addition, he compared it to a scene from one of The Beatles’ movies. Notably, audiences in the United States and the United Kingdom had different reactions to “Penny Lane.”“Or why don’t you put something about your childhood into the songs?'” John quoted the reporter saying. “Which came out later as ‘Penny Lane’ from Paul — although it was actually me who lived in Penny Lane — and ‘Strawberry Fields [Forever].'”