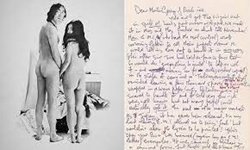 The cover of a John Lennon album features him and Yoko Ono naked. John said “people got so upset by it.”
The former Beatle said his relationship to the press changed after the release of the album.

One of John Lennon‘s albums features him and Yoko Ono nude on the cover. Subsequently, John responded to the claim he and Yoko only created the cover for “shock value.” Notably, the album became far more popular in the United States than it was in the United Kingdom.John responded to the claim he and Yoko got naked for shock value. “Well, that’s ridiculous, you know,” he said. “Later people started saying, ‘They’ll do anything for publicity,’ and then when we stopped talking to the press, we became ‘recluses,’ but we got more publicity than when we talked to the press.”