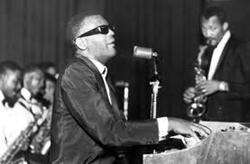 When speaking about the influences on The Beatles‘ music, John Lennon was always ready to pay tribute to the great musicians who came before him. Speaking about the early hit “Please Please Me,” John said it began as his crack at a Roy Orbison song.

In other cases, he might take an Elvis Presley line and run with it. Or he’d take a Beethoven piano lick and play it backwards to come up with a new theme (as on “Because“). When it came to the 1961 Bobby Parker track “Watch Your Step,” John acknowledged its influence on multiple Beatles songs. And he called it a direct descendant of Ray Charles’ “What’d I Say.”

On “I Feel Fine,” the 1964 single that topped the Billboard charts, John followed Parker’s lead with a riff he played in nearly the same tempo. Meanwhile, the rhythm Ringo Starr laid down also traces back to Charles’ groundbreaking 1959 track via Parker.