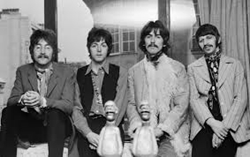 The catalogue of The Beatles is undoubtedly one of the most impressive in musical history. But what were John Lennon, George Harrison, Paul McCartney, and Ringo Starr’s favourite Beatles album?

As a single unit under the moniker of The Beatles, the four individuals may have at times moved as one but in truth, their individualism would often lead them down different paths. The personalities of The Beatles are part of what endeared them to so many hearts across the world during their explosion in the swinging sixties.

While some of that was down to the marketing of George Martin, it was certainly true that their different tastes and talents were an organic evolution of not only the band but the members as people in their own right.

This led to a beautiful tapestry of all four members’ songwriting expertise. Lennon and McCartney will always be remembered as the principal songwriters in the band but Harrison and Starr’s contribution can not be underestimated.