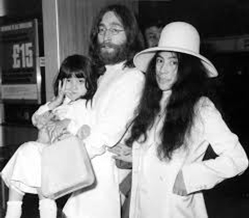 John Lennon's widow Yoko Ono spent decades apart from her daughter Kyoko after her ex-husband, jazz musician Tony Cox, abducted her at the age of 8.

When Japanese artist Yoko Ono first met John Lennon in 1966, she was already married, as was he. The two fell in love, and Ono divorced her then-husband jazz musician Anthony Cox, with whom she shared a daughter.

A vicious custody battle ensued, and Cox resolved the issue by abducting their 8-year-old daughter Kyoko Ono Cox. Cox joined a cult and vanished with little Kyoko, and it would be 23 years before Ono saw her daughter again.

At first, Lennon explained, it seemed as if Ono's divorce from Cox would be amicable, and no formal custody agreement was filed with regards to Kyoko. But as time went on, things soured between the exes, and Cox absconded with the little girl.

Lennon and Ono traveled in search of the child, from America to England, Denmark, and Spain, and finally decided to sue for custody in the U.S. Virgin Islands, where Ono and Cox's divorce had been filed.