YOU may well have hummed along to one of his songs. Perhaps you have dropped a few coins into his guitar case. But you probably haven't realised just how popular busker Danny McEvoy is. A regular sight in East Grinstead town centre, he may well be Britain's best-loved busker as his YouTube videos have just passed two million views.

A huge fan of The Beatles, he has covered every song ever written by the Fab Four. This includes B-sides and album tracks, and has led to the 51-year-old steadily building up an online fanbase. Danny busks in towns up and down the country, with East Grinstead, Crawley, Redhill and Brighton among his most common stops. He has also sung Strawberry Fields in Strawberry Fields, Eleanor Rigby at the real Eleanor Rigby's grave, Rain in the rain outside Beatles hotspot The Cavern Club in Liverpool, and even Imagine next to the Statue of Liberty. Danny, who is originally from Liverpool and a lifelong Beatles fan, said: "I first filmed myself singing I Want To Hold Yo details 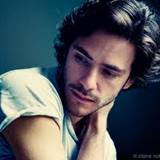 Jack told BANG Showbiz: "I was very lucky to be able to hang out with Paul McCartney for two hours and he's just an absolute legend. "I was surprised by his enthusiasm to talk about the stuff he's probably been asked [about] a thousand times. It's was as if I was the first person ever to ask him, 'What was it like to be a Beatle?' "He asked me how things are going and he said, 'Don't worry about things too much, just make sure you come up with good songs'. "He played me Lady Madonna on the piano and none of my friends believed me. It was a great experience and he has kept in touch since. He sent me a card on my birthday and a Christmas card. I wasn't expecting that. details 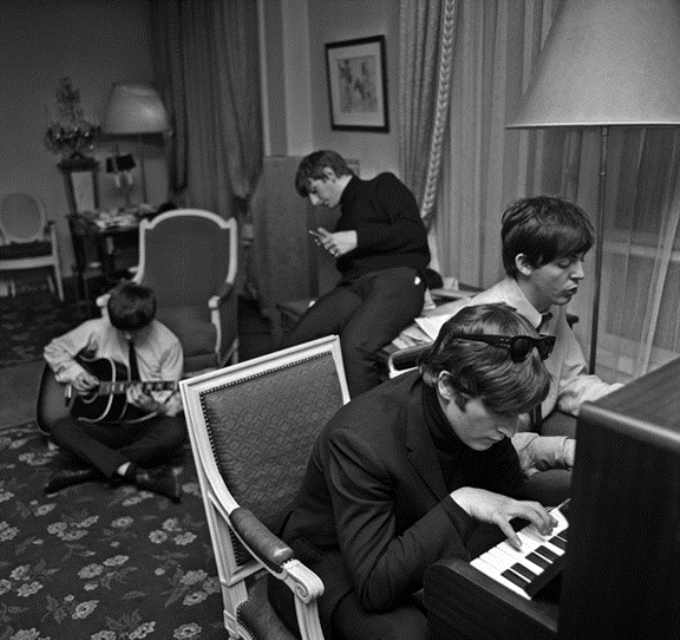 In January 1964 the Beatles toured Europe, having just become a sensation with the release of their debut album the year before. While playing a series of concerts in France, they stayed at the George V hotel in Paris (now the Four Seasons George V). The Beatles’ residency here was short but very important, as they wrote the hit “I Feel Fine”

in their hotel room, a song that would go to Number One on both the US and UK charts. It was in the same room that they received the phone call inviting them to visit the US for the first time. They accepted, and 50 years ago last month the group famously landed to a mob scene reception at New York’s JFK and appeared on the Ed Sullivan show, watched by more than a third of the US population. The British Invasion had begun and the rest is rock and roll history. The Beatles were not alone in their Paris hotel room or on their inaugural US tour. They were joined by legendary photographer Harry James Benson, CBE, who has shot a litany of global celebrities and political figur details

When a rare Beatles record was dropped off at a charity bookshop, it looked like the donation was going to raise a healthy £50. But for one keen employee at Amnesty Bookshop on Gloucester Road, that wasn’t good enough. Colin Richardson, a volunteer looking after collectable donations, took it upon himself to add even more value by writing to the artist behind the famous Revolver record sleeve.

Now the record has raised more than £1,000 which has been donated in its entirety to Amnesty International. The record first came into the shop around five or six weeks ago and was sent to Colin, 77, who filters through and picks out vinyl with his knowledge and experience of the music industry. When he saw the record he estimated it to be worth around £60. But the item also triggered memories of Colin’s past working in booking services in the music industry when he got to know the album cover’s famous artist Klaus Voormann. “At that point I thought ‘I wonder if I could get in touch with Klaus and ask him to sign it’,” C details

Angie McCartney and daughter Ruth have been Beatles insiders from 1964 onwards, when Angie married Sir Paul McCartney’s father, Jim, in November of that year. Angie and Ruth McCartney are coming to Chandler March 21 and will share their walk down the long and winding road of the biggest music phenomenon that the world has ever seen.

The mother-daughter duo, along with producer Martin Nethercutt, will host the “Magical History Tour,” an evening of live Beatles music, amazing stories and never-before-seen images from the McCartney family archive. The 90-minute multimedia spectacular will be interspersed with songs by the Mop Tops, the only McCartney-approved Beatles tribute band. Liverpool-born Angie became a Fab Four insider at the height of Beatlemania, which powered much of the music of the Swinging Sixties. Angie often witnessed Beatles history in the making and documented her life in last year’s autobiography “My Long and Winding Road: My first 82.9 Years.” She also heads up a line of teas (Mrs. McCartney’s Teas) details

Rare jackets worn by George Harrison and Ringo Starr during the making of the 1965 Beatles' film Help! sold for more than £50,000 apiece on Thursday. A piano used in the movie – which Sir Paul McCartney worked at while composing the classic song Yesterday – fetched a similar sum.

The jacket worn by Harrison sold for £54,000 including buyer's premium and the one worn by Starr fetched £61,100, both to UK collectors. The 1907 Bechstein grand piano sold for £57,500, to a South American collector. Overall the sale of more than 200 lots of rare Beatles' memorabilia, hosted by Omega Auctions at the Adelphi Hotel in Liverpool, fetched £264,375, including buyer's premiums. It was held to coincide with the 50th anniversary of the release of The Beatles' number one hit Can't Buy Me Love. Help! was a comedy adventure, directed by Richard Lester, which saw the group come up against an evil cult and flee to the Austrian Alps to seek refuge. The jackets were worn throughout the five days of filming in the Alps and also featured on details

A cape, suit and scrap of paper with three lines of lyrics were due to go under the hammer at the Omega Auctions sale at the Adelphi Hotel in Liverpool. Auctioneers believed the items had been given to the star’s former housekeeper and nanny Rose Martin by his late wife Linda 30 years ago. Following Mrs Martin’s death last year, her family decided to auction the items to provide a potential £30,000 windfall for her grandchildren. But they had to be withdrawn from sale after Sir Paul and his legal team stepped in, claiming that the items did not belong to Mrs Martin’s family Auctioneer Paul Fairweather said: "Unfortunately, the lawyers have claimed that Paul would never have given any c details

FOR nearly 50 years, Amy Lester and her two younger sisters have been sharing stories about the day they met The Beatles in Brisbane. The Rockhampton women have vivid memories of the monumental event but have never had photographic evidence - until now.

A chance discovery on the internet has unearthed a black and white image showing Amy with band members Ringo Starr and George Harrison. It is credited to photographer John Howard. Also in the photo is a female ranger from Lone Pine Sanctuary, who was there to introduce the English band members to some of Australia's native wildlife. Amy cannot believe the photo has finally come to light, bearing witness to the historic occasion when three indigenous sisters from the small Central Queensland town of Bluff got to mingle with rock royalty. "It's just amazing. It's incredible seeing it after all this time," the 73-year-old said from her Rockhampton home. "For 49 years and nine months we've talked about it but we've had no proof. Now here it is. "The funny thing is that I wasn't really a Beatles' f details 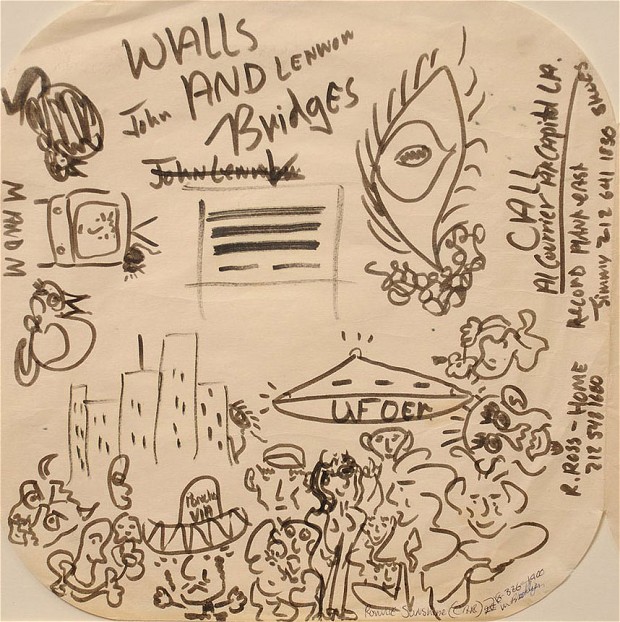 A letter written by John Lennon blaming rockers Keith Moon and Harry Nilsson for urinating on a console at a recording studio is up for sale. The former Beatle was frustrated by the hellraising pair's behaviour in the studio they all shared in Los Angeles in the early 1970s.

Lennon complained to famed producer Phil Spector, who he was working with at the time, and titled the note 'A matter of pee'. In it, Lennon stated that Capitol Records wanted to evict the three of them for using their studio as a public toilet. He said he couldn't be expected to 'mind adult rock stars' and warned he was about to join rival recording studios Record Plant because of the aggravation. The note, written in red felt tip pen on lined paper, was later given by Lennon to American session guitarist Jesse Ed Davis. Davis provided lead guitar for Lennon's album 'Wall and Bridges' in 1974 and 'Rock and Roll' in 1975.

Peter Frampton to Be Featured on Next Ringo Starr Album - Wednesday, March 19, 2014

Peter Frampton has gotten to join Ringo Starr on stage several times in recent months, and now fans will be able to hear the veteran guitar whiz on the ex-Beatles drummer’s upcoming album.  Late last week, Frampton posted a photo on his Facebook page showing him and Starr together that was accompanied by a note that reads, “Played on two tracks of Ringo’s next cd yesterday.

This past January, Frampton served as part of Ringo’s backing group during a tribute show to Starr at Los Angeles’ El Rey Theatre, and also hit the stage with the former Beatle at the 2014 Grammy Awards and at the taping of the CBS special commemorating the 50th anniversary of the Fab Four’s historic Ed Sullivan Show appearance. Starr, meanwhile, also revealed in a post on his Twitter feed that his new album will feature “a lot of friends.”  Among said “friends” apparently is Toto guitarist and current All Starr Band member Steve L details