Paul McCartney Gives Wings To 007 With 'Live And Let Die' 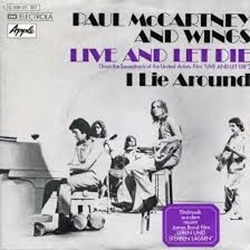 Paul McCartney has written countless lyrics that have been part of the soundtrack of the live of millions. But the opening line “When you were young and your heart was an open book…” was an especially evocative entry in his songbook because of its place in the James Bond movie franchise. ‘Live And Let Die’ entered the UK singles chart on 9 June 1973, and remains a key moment in McCartney’s live set more than 45 years later.

The song was even more significant to Beatles fans as it reunited Paul with the esteemed producer George Martin. He composed and produced the score for the film of the same name, the first to star Roger Moore in the 007 role. The title track, written by McCartney, was more than just one of his classic ballads, twice changing gear into suitably high-speed instrumental sections featuring Martin’s quite brilliant orchestrations.