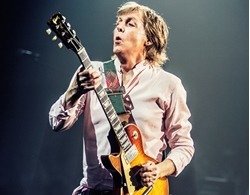 To coincide with the release of his new album Egypt Station tomorrow, former Beatle Paul McCartney has been teasing details on social media of a “secret” gig he’s planning in New York City that’s set for tomorrow night.

In keeping with a kind of freewheeling experimentation with technology that’s characterized his later years and recent releases, from toying with VR to writing a one-off song that plays at the end of the Destiny video game, Macca is teaming up with YouTube to livestream the show worldwide. It’s being billed as a “YouTube Original” and is set for 8 p.m. eastern time.

From an official announcement courtesy of the musician: “(Paul) confirms he will be joining forces with YouTube Originals to livestream a secret concert via his channel this coming Friday 7th September to celebrate the release of his new album Egypt Station. Fans will be able to tune in to watch Paul perform tracks from Egypt Station along with Beatles, Wings and solo classics from 8:00pm (ET). The venue is still to be confirmed.”