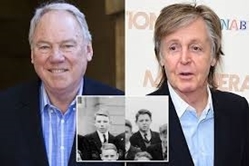 Paul McCartney has paid tribute to his childhood friend and the broadcast journalist Peter Sissons.

Earlier on Wednesday, a spokesperson revealed that the much-loved BBC and ITV newsreader had died at the age of 77 in hospital.

Before finding fame in their respective careers, Sissons and McCartney had been schoolmates and both attended the Liverpool Institute together in their youth.

Speaking out on Tuesday, the Beatles singer shared an open letter to his friend on his official blog.

Paul wrote: "Dear Peter, my old school mate from the Liverpool Institute (now LIPA) has passed away. It’s so sad to hear the news. We were in the same year and stayed in touch as time went by and we both followed our separate careers.