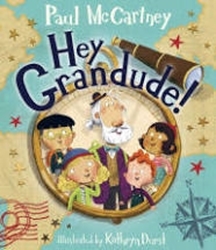 And they say legends don't do signings

Paul McCartney is going to be signing copies of his new picture book Hey Grandude! in London, it has been revealed.

Read more: The wisdom of Macca: what Paul McCartney told students at the college he founded

The Beatle will take part in a rare signing at the Piccadilly branch of London’s Waterstones alongside illustrator Kathryn Durst to celebrate his new children’s book on September 6.

During the special appearance, McCartney will read the story of ‘Grandude’ – “a super-cool Grandad who takes his grandchildren on a whirlwind magical mystery tour, from tropical seas to Alpine mountains, all before bedtime!”

The news was shared from McCartney’s official Twitter account today (August 8), on the same day as the 50th anniversary of The Beatles’ iconic ‘Abbey Road’ photoshoot.