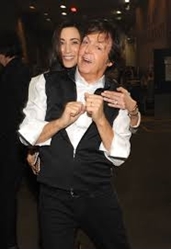 On October 9, 2011, The Beatles Paul McCartney married his third wife Nancy Shevell. At the time, the singer was 69 and Shevell was younger than him; aged 51.

McCartney, 78, and Shevell, 60, got married at London's Old Marylebone Town Hall with family and friends in attendance. It wasn’t expected that the former Beatle would marry again after he had a bitter divorce from his second wife.

McCartney had to pay out an alleged $35 million to Heather Mills in their divorce. What Shevell has in common with the musician’s first wife, Linda Eastman, is that she’s also an American.

Her father is Mike Shevell the owner of a transportation conglomerate which is estimated to be worth nearly half of a billion dollars. In 2011, the businesswoman served as the company's vice president.

She was also a board member of the Metropolitan Transportation Authority. Shevell, like Eastman, has also battled breast cancer.