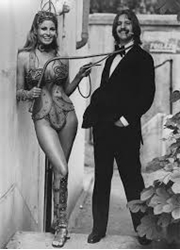 Raquel Welch was one of the many big names — or future big names — to appear in the wacky British satire The Magic Christian. In the black comedy, Ringo Starr plays a former homeless derelict who is adopted but the richest man in the world, played by Peter Sellers. Taking aim at greed and capitalism, the film sees the wealthy Sir Grand test the limit people will go to for money in a bizarre, offbeat caper aboard a luxury liner, The Magic Christian.

The episodic movie features the likes of John Cleese and Graham Clapham, who would go on to form Monty Python, as well as the likes of Spike Milligan and Richard Attenborough.

Welch also has a small part as the villainous Priestess of the Whip.

As things start to take a turn for the worse aboard The Magic Christian, guests begin to attempt to abandon ship.