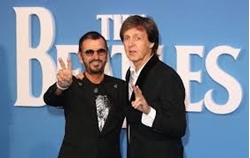 Ringo Starr has released his highly poignant version of the John Lennon song ‘Grow Old With Me’ as another taster for his 20th studio album What’s My Name, which is out on 25 October. Its flavour of a Beatles reunion is heightened by the presence, on bass guitar and backing vocals, of Paul McCartney, and by another ingredient that Ringo explained recently.

The recording was part of a collection of Lennon demos, of which Starr only became aware recently. He explained that it had John saying “This will be great for you, Ringo” at the beginning. “The idea that John was talking about me in that time before he died, well, I’m an emotional person,” he said. “And I just loved this song. I sang it the best that I could. I do well up when I think of John this deeply. And I’ve done my best. We’ve done our best.