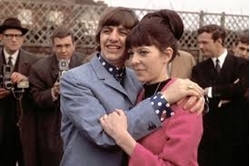 The first time Sir Richard Starkey, otherwise known as Ringo Starr, played with the Beatles, the crowd was so angry…they beat him up. Fans were so disappointed that original Beatles drummer Pete Best had been replaced that newbie Starr left the Cavern Club concert in Liverpool with a black eye. But Ringo Starr eventually grew on audiences worldwide, becoming one irreplaceable fourth of the Beatles magic.

Although Starr did not have much of a solo career compared to his bandmates John Lennon, Paul McCartney, and George Harrison, he was a multi-talented musician in his own right. Starr wrote the Abbey Road hit, “Octopus’s Garden” and lent vocals to “With a Little Help from My Friends” and “Yellow Submarine.” While some may call Ringo Starr the forgotten Beatle, we disagree! However, there is one figure of Beatles history who is often overlooked: Starr’s first wife, Maureen Starkey Tigrett (née Maureen Cox.) So, what’s the story behind the mother of Ringo Starr’s three children?