Robbie Robertson celebrates The Band in the documentary 'Once Were Brothers' 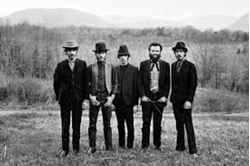 It is hard to make a movie about The Band without mentioning Martin Scorsese’s film, “The Last Waltz,” which captured the group’s final concert at San Francisco’s Winterland Ballroom in 1976. Scenes from that documentary and an interview with Scorsese are part of “Once Were Brothers: Robbie Robertson and The Band.” There also are interviews with several people who appear in both films, including Bob Dylan, Eric Clapton and Van Morrison.

Hit songs such as “The Weight,” “Up on Cripple Creek” and “The Night They Drove Old Dixie Down” guarantee The Band’s place in rock and roll history. Among the musicians testifying to the group’s impact in the film are Bruce Springsteen and George Harrison, as well as record executive David Geffen. The group’s core members played together for roughly 16 years (though Levon Helm departed for a few years), including stints backing Ronnie Hawkins and Bob Dylan.