Strawberry fields forever: "150 Glimpses of the Beatles" by Craig Brown 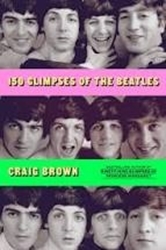 “They are awful. But I also think they’re fabulous. Let’s just go and say hello.”

What if young record store manager Brian Epstein had not, in 1961, after a scrappy gig in a “sweaty basement,” popped over to say hello to the band? What if, as Craig Brown wonders in 150 Glimpses of the Beatles, Paul had done better in his exams, moved up a school year, and never gotten to know George? Or Ringo had had more patience with U.S. immigration forms and succeeded in moving to Houston? Or the engine fire on a 1965 flight from Minneapolis to Portland had ended in catastrophe, cutting the band off in their prime? “Think what we would have missed if we had never heard the Beatles,” the Queen once mused. As the world marks 40 years since the murder of John Lennon — gone, now, for as long as we had him — shimmering alternative histories are especially poignant. A feeling of loss is palpable.