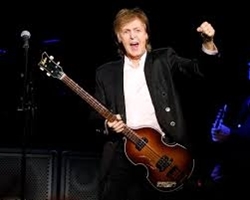 Legendary Beatle Paul McCartney teamed up with surf filmmaker Jack McCoy to produce Wine Dark Open Sea, a music video featuring McCartney’s heartfelt song of the same name written in tribute to the ocean and the graceful longboarding of Belinda Baggs, which premiered on November 5. The video is available on Epicentre.tv for a five-dollar donation that will go to supporting the work of brand new organization Surfers for Climate as well as partner organizations Surfrider Foundation Australia and Seed Mob.

Fight for the Bight brought surfers from Australia and all over the world together to fend off Norwegian oil giants intending to drill in the Great Australian Bight as the biggest coastal environmental action in Australian history. Now, having found their voice in defending their local coastline, many of these same surfers and activists have come together to defend coastlines all over the world from the ever-present threat of climate change under the organization of Surfers for Climate, founded by longboarding champion Belinda Baggs and former pro-surfer Johnny Abegg. And they’re not without help. Pro surfers Adrian “Ace” Buchan, Laura Enever, Pacha Light, McCoy, and musician Jack River stand in support of Surfers for Climate, as well as Paul McCartney.