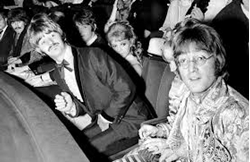 The Beatles weren’t virtuoso musicians, and they were usually the first to admit it. When John Lennon spoke to Playboy’s David Sheff in 1980, he put it this way: “Not technically great. None of us were technical musicians. None of us could read music.”

In 1977, George Harrison spoke about how his guitar technique slipped in the late ’60s. It was pretty simple: He stopped playing guitar for three years to focus on the sitar. When he picked up his guitar again, he focused on slide because he felt “so far behind in playing hot licks.”

As for Paul McCartney, the best all-around musician in the band, he spoke of how difficult it was for him to play the piano riff on “Martha My Dear.” That leaves Ringo, a drummer who refused to take a solo until the last track of the band’s last studio album.