The Beatles' 1964 Melbourne show to be broadcast next week 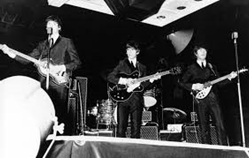 As The Music Network reports, The Beatles played a sold-out show at Melbourne’s Festival Hall back in 1964, performing tracks including ‘She Loves You’, ‘I Saw Her Standing There’, ‘Twist and Shout’, ‘Can’t Buy Me Love’ and ‘Long Tall Sally’. While John Lennon, Paul McCartney and George Harrison were all there, the band relied on the services of stand-in drummer Jimmie Nicol during the concert. All up, the group played 13 shows across Australia.

Nine will be airing the full concert, titled One Night Only – The Beatles in Oz, on Monday (July 13) at 9:30pm AEST. It will also be available to stream on 9Now. The concert will be remastered and will include never-before-seen footage.