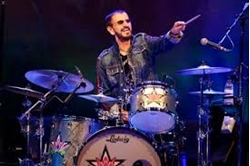 Ringo Starr, the drummer for the British rock band The Beatles, is celebrating his 80th birthday today.

Because of the coronavirus pandemic, according to BBC, Starr will forgo his annual birthday gathering and instead perform a concert on YouTube at 8 p.m. ET today.

Starr was the last to join The Beatles. The group was formed in 1960 in Liverpool with Paul McCartney, John Lennon, George Harrison and drummer Pete Best. Starr joined as the drummer in 1962.