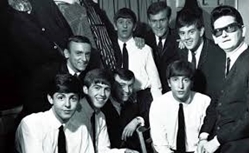 Gerry Marsden died on Sunday, January 3 at the age of 78-years-old after being diagnosed with a blood infection in his heart. The Liverpool FC anthem singer was also the leader of Merseybeat band Gerry and the Pacemakers who were managed by Brian Epstein and recorded by George Martin just like The Beatles. Now Sir Paul McCartney and Sir Ringo Starr have paid tribute to Marsden on Instagram, who Macca says was the Fab Four’s first big rival in the early days.

The two bands and American singer are pictured in what looks like a dressing room.

The 78-year-old Beatle wrote: “Gerry was a mate from our early days in Liverpool. He and his group were our biggest rivals on the local scene.

“His unforgettable performances of You’ll Never Walk Alone and Ferry Cross the Mersey remain in many people’s hearts as reminders of a joyful time in British music. My sympathies go to his wife Pauline and family. See ya, Gerry. I’ll always remember you with a smile. - Paul.”