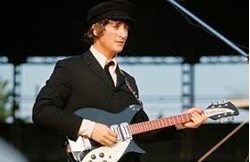 While John Lennon was never did a lot of bragging about his Beatles-era guitar playing, he did take pride in his innovations in the studio. That included the backwards vocals on “Rain” as well as the work with tape loops he did on “Revolution 9.”

But an even bigger point of pride for John revolved around his use of feedback. During the October 1964 sessions for Beatles for Sale, John pushed to get the sound of his guitar/amplifier feedback on record. Producer George Martin agreed, and John considered it a major accomplishment.

“The record with the first feedback anywhere,” John said in his 1980 Playboy interviews. “I defy anybody to find a record – unless it’s some old blues record in 1922 – that uses feedback that way.”

Though not everyone agrees it was the first, the song in question became the Beatles’ eighth single and was released in November ’64. And it became a No. 1 hit in both the U.S. and UK.