The Beatles' Singles: 22 Songs That Changed The World 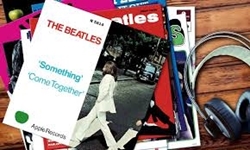 When we look back at The Beatles’ career, it’s only natural that we trace their progress through the groundbreaking albums they made between 1963 and 1969. But that only tells part of the story. The Beatles may have helped shift the focus from singles to long-playing albums, but at the start of their career they were, first and foremost, a band that made phenomenal singles, many of which didn’t actually appear on their albums. With pop music still primarily a singles market in the mid-60s, The Beatles’ singles, then, offer something of a parallel discography: a different lens through which to trace their artistic trajectory.
1962: ‘Love Me Do’

The group had actually recorded a single even before signing with Parlophone. Credited as The Beat Brothers, John, Paul, George and Pete Best backed the English singer Tony Sheridan on a rocked-up version of ‘My Bonnie Lies Over The Ocean’, which was released on Polydor in West Germany. It was a customer’s request for that recording that led to Liverpool record-shop owner Brian Epstein tracking down and eventually managing The Beatles.