The Gruesome Accident That Led to The Beatles Growing Mustaches 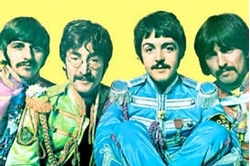 Mustaches have gone in and out of style for centuries. Some consider them powerful and masculine, while others consider them downright silly. Today we even have a fake mustache trend where people joke about the look by holding up paper cutouts of a mustache or draw a mustache shape on their inner finger to hold up to their face.

We love to laugh about a character twisting his mustache “handlebars,” but this isn’t a new phenomenon.

At one time the Beatles wore mustaches and even made it into a joke by providing mustache cutouts to their fans. However, the 60s trend almost didn’t happen. Here’s the story of the accidental reason the Beatles decided to grow a mustache.
Paul McCartney suffered a gruesome accident
It turns out that the hairy upper lip, which became such an iconic Beatle’s look, was all because of a moped accident. In December of 1965, Paul McCartney lost control of his moped and crashed. After smacking his face on the pavement, McCartney left the scene with a split upper lip and a chipped tooth.