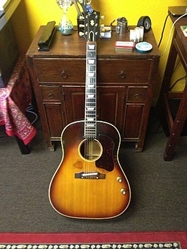 In 2014, John Lennon’s 1962 Gibson J160e guitar, once thought lost, was discovered in San Diego at Marc Intravaia’s Sorrento Valley Sanctuary Art and Music Studio. The following year, it went up for one of the most publicized auctions in Beatles history. However, “Once the story broke on Reuters, there was quite a few awful comments about my friend [John McCaw, the guitar’s owner] from people not knowing the whole story,” Intravaia told the Reader at the time. “He bought it in 1969 from a friend and never knew what he had until he brought it to me last August.”

John McCaw bought the mildly beat-up Gibson acoustic from a friend for $175, in a transaction at the Blue Guitar shop, then located in Old Town. "John joined my Tuesday night Potluck Players instructional jam group in 2009," says Intravaia, "and would bring along his now vintage Gibson from time to time, and we would take turns strumming this instrument while noting its fantastic action - string height and playability - and pretty tone."